Rescue workers searched Wednesday in Mexico City and nearby states in hopes of finding survivors of a magnitude 7.1 earthquake that killed at least 225 people and collapsed dozens of buildings. 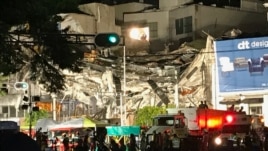 Colonia Roma its one of the areas of Mexico City greatly affected by the earthquake, Sept. 19, 2017. This is an office building where rescuers are trying to get people out of the rubble. Three people were take out alive Wednesday.

The epicenter of the quake was in Puebla, 123 kilometers southeast of Mexico City.

President Enrique Nieto said of the people still trapped in collapsed buildings that "every minute counts to save lives," and rescuing those individuals is the country's top priority. He declared three days of national mourning to honor those who were killed.

Rescue workers search through rubble during a floodlit search for students at Enrique Rebsamen school in Mexico City, Mexico, Sept. 20, 2017.

The Israeli military said it would send a team of 70 people to help with rescue efforts by providing engineering assistance. Israeli military spokesman Jonathan Conricus said the team will help survey buildings to determine their damage and safety levels.

A group of 32 rescuers from Panama arrived with two canine rescuers to help find people trapped in collapsed buildings and dig them out. They arrived at the Benito Juárez International Airport in Mexico City, Sept. 20, 2017.

On Wednesday morning, Pena Nieto visited a three-story school in the capital city that collapsed and was the site of one of the rescue operations. Mexico's education secretary, Aurelio Nuno, said 25 people were killed at the school, while 11 others were rescued and 30 were missing.

Local media reported extensive damage, power outages and fires throughout Mexico City, one of the most populous urban areas in the world.

Canadian travel blogger Mike Corey was in Mexico City when the earthquake hit. He told VOA he was sitting in his apartment when the building started shaking.

Rescue workers search for people trapped inside a collapsed building in the Roma Norte neighborhood of Mexico City, Sept. 20, 2017.

"The building was just jumping. ... I remember running down the stairs to get to the bottom and it was like being in a pinball machine."

When he went outside, he said he saw all the buildings and power lines shaking. He said he saw a five-story building collapse "like a deck of cards."

"You could see black smoke off in the horizon. Helicopters were up immediately flying over the city," he said. "We went over to see if we could help at the building, but there was blood on the street, glass all over the place; we had bare feet. What are we going to do?"

The scariest part of the ordeal, he said, was the loss of cell reception, "which is not good if you're trapped underneath things."

Volunteers working with the rescue teams in Mexico City signal to keep silent. The close fist is a sign to be quiet in order for the rescuers to listen and identify the location of survivors.

"I guarantee that cost lives, because someone's there, they can't contact anybody and they're trapped under rubble," he said.

U.S. President Donald Trump spoke with Pena Nieto in the aftermath of the earthquake, according to White House press secretary Sarah Huckabee Sanders, who said Trump "had a lengthy call" with the Mexican president.

Trump had previously sent a message of support for Mexico from New York, where he is attending the U.N. General Assembly.

Trump tweeted: "God bless the people of Mexico City. We are with you and will be there for you."

Pope Francis acknowledged the victims of the earthquake during an open prayer Wednesday in St. Peter's Square, saying he wanted to "express my closeness and prayer to the dear Mexican people."

The quake hit less than two weeks after another earthquake killed more than 90 people in the country's south. The U.S. Geological Survey said the two quakes appeared to be unrelated.

USGS seismologist Paul Earle said the two epicenters are 650 kilometers apart and most aftershocks are within 100 kilometers.

The earthquake struck exactly 32 years after an 8.0 temblor killed nearly 10,000 people in and around Mexico City.

VOA's Victor Beattie and Steve Miller contributed to this report.

The Americas
Strong Quake Near Mexico City Kills Almost 150
Rescue crews and ordinary citizens searched through rubble for survivors as night fell on Tuesday on battered cities in central Mexico, including the capital, where the death toll from a major earthquake grew to at least 149.The magnitude 7.1 quake toppled dozens of buildings, broke gas mains and sparked fires less than two weeks after another powerful quake killed at least 98 people in southern Mexico. It also hit just hours after emergency drills marked the anniversary of a…