A small U.S. manufacturing company is growing and hiring more people, in part because of lessons it learned from discovering revolutionary processes for making lobster traps and applying those skills to other projects, such as security fencing for the U.S. border with Mexico.

Riverdale Mills has expanded from 60 people to 185 employees during the past few years, and Chief Executive Officer Jim Knott says he is trying to hire another 35 workers. The expansion comes at a time when about one-third of U.S. manufacturing jobs nationwide have disappeared because of trade problems and a rising tide of automation.

The Northbridge, Massachusetts, firm says its wire mesh products are used in most of the lobster traps in the United States and Europe, replacing traditional wooden devices. Riverdale uses proprietary processes to improve its rustproofing and preserve the rust protection in harsh environments. A government report says commercial landings of American lobsters totaled 67 million kilograms and were valued at $567 million in 2014. 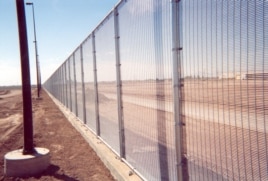 Riverdale Mills of Northbridge, Massachusetts, already supplies some fencing along the Arizona border with Mexico.

Lessons from lobstering inform other designs, including security fences that protect nuclear facilities, U.S. embassies and borders. Knott would like to sell more security fence as part of President Donald Trump's plan to put a wall along the Mexican border, but says the government's plans and specifications are not yet clear.

Riverdale's products are also used in the aquaculture industry to help grow oysters and fish in environments that pose a challenge for many materials. That could also lead to more sales and jobs, because a report from Grand View Research, a business consulting firm in San Francisco, says aquaculture is expanding as demand for healthy protein grows and stocks of some wild caught fish falter.

Riverdale can make thousands of different kinds of mesh out of steel and other materials. It draws steel rods through ever smaller openings until it gets wire of just the right thickness.

Riverdale can make thousands of different kinds of mesh out of steel and other materials. It draws steel rods through ever smaller openings until it gets wire of just the right thickness. The wires are then arranged in a crisscross pattern on huge, highly automated, noisy machines that can apply hundreds of welds at a time.

Wires for Riverdale's mesh products are arranged in a crisscross pattern on large machines that can apply hundreds of welds at a time.

The completed mesh is then run through a vat that holds many tons of molten, glowing zinc, a process that yields a rust-resistant product that can survive in saltwater. For lobster traps and other marine applications, the mesh may also be coated with a plant-based plastic powder that offers further protection.

Riverdale has expanded the proportion of its products that are exported, recently rising to 45 percent. Knott says exports are one key reason the firm has been able to grow.

Archive
Factory Boss Says Fishing Technology Could Improve Controversial US Border Wall
A manufacturing company says skills and technology it developed making lobster traps could help save money on U.S. President Donald Trump's controversial plan to build a wall along the U.S.-Mexico border.  Riverdale Mills' super-tough steel fence already guards 43 kilometers of the border, and the company says its technology has proven to be a cost-effective way to secure airports, prisons and nuclear facilities.The small firm is based in Northbridge, Massachusetts,…