HARRISONBURG, VIRGINIA - Hugo Kohl has been interested in art and design since he was a child. In college, he studied finance, but also took several jewelry-making classes to satisfy his curiosity about this form of art and the history behind it. Upon his graduation, he started a career in financing, but after six weeks he quit to pursue his passion. Over the last 25 years, Kohl has developed his own style of vintage jewelry using the same techniques as industrial revolution artisans at the end of the 18th century. 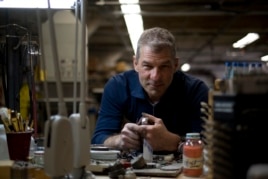 Hugo Kohl’s Museum of American Jewelry Design and Manufacturing in Harrisonburg, Virginia, is part museum, part workshop and part showroom. Visitors can buy handmade antique-style jewelry, and also watch the artist create them, using vintage machines. These machines were made before electricity and are literally man-powered as artisans have to use physical power to press the design on the metal.

In reproducing these old designs, Kohl has revived a centuries-old technique for jewelry-making, called die strike or die roll.

“The things I’m talking about are being die struck and die rolled, which means a lot of pressure among two pieces of steel,” he explains. “When you die strike something or die roll something, typically it’s going to go last a couple of generations. A lot of times people will be in love with vintage jewelry for a number of reasons, one is the design. The process of die striking allows for tremendous detail. It’s very crisp, very clean.”

One of the hub collections Kohl uses dates back to the late 1800s. (Courtesy Hugo Kohl)

Kohl creates these details using thousands of 3-D molds he collected over more than two decades. He acquired one collection in Providence, Rhode Island, which was the jewelry making capital of the world at the start of the Industrial Revolution.

He says there is an interesting story behind this collection.

In 1993, while on tour of a vintage jewelry machinery warehouse, Kohl noticed workers cleaning up the debris of a nearby collapsed building.

“They were picking up the debris and throwing it in the back of a dump truck,” he recalls. “One of the things that they picked is that tiny little cabinet. It was going to the side of this dump truck, it breaks open and the contents literally fall at my feet. I picked them up and what they are is what this place is built around.”

Those items that were about to be sold as scrap metal were part of a collection of antique, hand-engraved jewelry molds that dated to the late 1800s and early 1900s.

“You ask somebody who is your great grandfather, your great, great grandmother, you go back to just a short period of time. Here, somebody was your ancestor. These pieces are the ancestors of the American metal-smithing and silver-smithing. And they bring to a very tangible way the processes, the technical skills that are involved and the meaning of what these pieces meant to people.”

Artist Kohl says his fascination with Industrial Revolution age jewelry goes beyond its artistic beauty. This industry, he says, started a social shift in America.

Before the Industrial Age, only wealthy, elite people had the means to commission a goldsmith to hand-craft a ring or brooch or other piece of jewelry. This was extremely expensive, not something that ordinary people could afford.

“Now that we stepped into the Industrial age, beside the technology, we have the middle class," Kohl says. “So this is the first time that symbols can be mass-produced and people could have them. The wealthy people still had jewelry that was made in gold. This new class had things that were made in silver and clad metal and poor people had the same art work in brass and copper.”

That’s also when the American cultural symbols were exported to the world.

“What these symbols are speaking to are very new ideas about American liberty and romantic love,” he says. “So we look at these things, we start seeing this uniquely American identity take shape. This was happening in Providence (Rhode Island). But Providence is not big enough as a marketplace to cover the cost of manufacturing, but Providence is a seaport and ships were going all over the world carrying these symbols.”

Art Professor Welter says he’s happy that Kohl is passing his passion and the secrets of his craft to people who visit his museum and workshop.

“I really enjoy the entire scope of what happens here,” he adds. “It’s not just the preservation of the work, but it’s the recreation of the works and it’s the selling the works to the public. So they all become part of the culture again.”

And to customers like Sarah Brown, it’s nice to own part of the American heritage.

“When I come in, I love to be able to look and see the jewelry is made right here," she notes. “Hugo is often here. It feels very personal and the pieces, like I say, are unique and beautiful. They have a timelessness about them that just feels really good. It feels like they kind of tell a story.”

And Hugo Kohl enjoys bringing those stories to life.