KYIV - Mikheil Saakashvili, the former Georgian president turned Ukrainian opposition leader, has vowed that he will continue to resist arrest after his supporters dramatically freed him from custody in Kyiv.

Facing a deadline to turn himself in to the authorities later in the day, Saakashvili told supporters at a protest camp near parliament early on December 6 that he would not comply.

"I will not show up at the pseudo Prosecutor-General's Office," he said. "I am ready to talk to investigators here in the camp."

"Our plans are clear. Our main goal is to remove a criminal group from power and impeach it," Saakashvili said, referring to President Petro Poroshenko's administration.

His remarks came after prosecutors on December 5 issued a 24-hour deadline for Saakashvili to turn himself in to police, and after a predawn clash between National Police officers and protesters camping out near the Verkhovna Rada.

Authorities said at least four police officers were injured in clashes that broke out as they began searching tents in an attempt to locate Saakashvili. Protesters said nine activists were injured.

The police "planned to take me out of a tent, but attacked the wrong tent" and "severely beat" activists who had been sleeping, Saakashvili said on Facebook.

Saakashvili also appealed to Poroshenko in the Facebook post, saying: "Why do you want these provocations? Don't attack and you won't make people fight back! It's a peaceful action! Haven't you learned anything?"

That was reference to previous turmoil in Ukraine, including attempted crackdowns on the massive Euromaidan protests that pushed Moscow-friendly President Viktor Yanukovych out in 2014 and brought Poroshenko to power.

Former Georgian president Mikheil Saakashvili, back to a camera, gestures to protesters after he escaped with help from supporters and led them on a march toward parliament, where they planned to call for President Petro Poroshenko to resign in Kyiv, Dec.

Some of Saakashvili's supporters were stockpiling bricks at the protest camp and setting up barricades with tires shortly after dawn on December 6 as heavy snow fell on the Ukrainian capital.

Prosecutor-General's Office spokesman Andriy Lysenko said the authorities ordered the manhunt following a chaotic scene on December 5 in which security forces stormed Saakashvili's apartment and detained him, but supporters later freed him from a police van.

Larisa Sarhan, a spokeswoman for the prosecutor-general, said on December 6 that Saakashvili now faced three criminal charges -- attempting to commit a crime, involvement in premeditated criminal activity by a group of persons, and providing assistance to a criminal organization and concealing their criminal activities.

After he was freed from detention, Saakashvili led hundreds of his supporters in a march to parliament and demanded Poroshenko's resignation, calling him a "criminal" and a traitor to Ukraine.

Saakashvili also urged Ukrainians to rally on Maidan Nezalezhnosti, or Independence Square, the epicenter of the Euromaidan protests in 2013-14.

"An organized criminal group has seized power in our beloved Ukraine," Saakashvili told the impromptu rally. "I call on everyone, every real Ukrainian, to demand his resignation."

Ukrainian authorities claim that Saakashvili is being backed by Russia or forces there -- an assertion that the former Georgian president, who has been hated by the Kremlin since a five-day war between Georgia and Russia in 2008, has dismissed.

Prosecutor-General Yuriy Lutsenko alleged on December 5 that an "organized crime" group led by Yanukovych, who is in exile in Russia, has financed protests organized by Saakashvili.

The turmoil in Kyiv comes at a time when Ukraine is fighting Russia-backed separatists in a war that has killed more than 10,000 people in the eastern region known as the Donbas, and with no end in sight to Russia's occupation of Ukraine's Crimea region.

From Georgia to Odesa

Saakashvili rejected the allegations against him as "cynical and ridiculous."

"There is no more bitter foe of [Russian President Vladimir] Putin in the world than me, and the accusation that I am linked to Russia is completely absurd," said Saakashvili, who also called for Lutsenko's resignation.

Lutsenko on December 5 told parliament: "In 24 hours the entire Ukrainian justice system will do everything necessary for the stateless Saakashvili to face investigators, and afterwards, court." 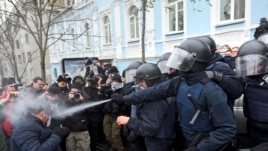 Police use tear gas as they clash with supporters of former Georgian president Mikheil Saakashvili in Kiev, Ukraine, Dec. 5, 2017.

Saakashvili became stateless when Poroshenko issued a presidential decree in July, while he was abroad, that stripped him of his Ukrainian citizenship.

He returned to Ukraine in order to challenge that decree in the Ukrainian courts and has been leading opposition protests against Poroshenko.

Saakashvili rose to power in Tbilisi during Georgia's peaceful Rose Revolution in 2003 and served as Georgia's president from 2004-13.

He conducted major reforms and fought corruption in the former Soviet republic, but was accused of abusing his power. Authorities in Tbilisi have charged Saakashvili of trying to organize a coup there after leaving office, an allegation he denies.

Poroshenko in 2015 appointed Saakashvili -- an acquaintance from university days -- as governor of Ukraine's Odesa region in the wake of the Euromaidan protests that brought a pro-Western government to power in Kyiv.

Saakashvili surrendered his Georgian citizenship to take the post.

But Saakashvili resigned from the Odesa governor's post and went into opposition in November 2016, saying his reform efforts there were being blocked by Poroshenko's allies.

'Not a Good Idea:' Experts Concerned about Pope Trip to Iraq