3 Ahmadi Men Sentenced to Death in Pakistan on Blasphemy Charges

WASHINGTON - A court in Pakistan’s Punjab province has sentenced three men of a minority religious group to death on charges of violating the country’s controversial blasphemy law.

Mubasher Ahmad, Ghulam Ahmed and Ehsan Ahmed were found guilty and convicted by the trial court Wednesday for insulting the prophet of Islam.

The men were tried under Section 295-B of Pakistan’s penal code, commonly referred to as the blasphemy law, which recommends either life imprisonment or the death penalty for anyone found guilty of deliberately insulting Islam.

The men were arrested in May 2014 in a remote village in Punjab province after residents filed a complaint with the police and accused the defendants of tearing down a religious poster.

Four men were arrested at the time. The fourth man, Khalil Ahmad, was shot dead by an angry man while in police custody just a few days after the incident.

Saleemuddin, a spokesperson for the Ahmadi community, told VOA that the charges against the defendants and the court’s verdict were unfair.

“The convicted men were trying to take down a poster, which had anti-Ahmadi slogans and text that urged the community to socially boycott the already persecuted Ahmadi community,” Saleemuddin said.

“We will challenge the trial court’s decision in high court,” he added.

Ahmadis consider themselves Muslims, but Pakistan’s state does not recognize them as such and labels them heretics. There are more than a half-million Ahmadis living in Pakistan under the constant threat of persecution.

The Ahmadi community "is one of the most mistreated communities in the country. They have had been a target of blasphemous charges, sectarian violence and target killings,” said Mehdi Hasan, a prominent human rights activist in Pakistan.

The death sentence for the three individuals came just a few days after Muhammad Safdar, a prominent member of the ruling party and son-in-law of ousted Prime Minister Nawaz Sharif, publicly denounced Ahmadi community members as a threat to Pakistan and urged the country’s institutions not to hire them in the military or the civil service.

Safdar’s remarks stirred a debate in the country on the issue of minorities and their rights.

Pakistan Minister of the Interior Ahsan Iqbal, without mentioning Safdar by name, denounced the anti-minority rhetoric coming from politicians.

“It is tragic to see hate speech against minorities in National Assembly. We believe in inclusive Pakistan. Pakistan respects all minorities,” Iqbal said in a tweet.

“Blasphemy is a very sensitive issue in Pakistan. We’ve seen several incidents where angry mobs killed those accused of committing blasphemy without giving them a right to face the trial,” human rights activist Hasan told VOA.

Rights groups say the controversial blasphemy law has often been abused to settle personal vendettas and disputes. Due process is often ceremonial, the rights activists add, and decisions are often informed by the growing religious intolerance in the country.

Even if courts do drop charges against defendants, mobs and local residents attack them, and law enforcement authorities look the other way in most cases, the activists charge. 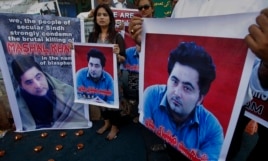 FILE - Members of a Pakistani civil society demonstrate April 22, 2017, in Karachi, Pakistan, against the killing of Mashal Khan, a student at the Abdul Wali Khan University in the northwestern city of Mardan. Police say the lynching of Khan, falsely accused of blasphemy, was organized by other students who saw him as a political rival.

Nadeem James, a Christian, was sentenced to death last month in Punjab after the court established that he sent a blasphemous poem to a friend via WhatsApp, an instant message application.

The Human Rights Commission of Pakistan in a recent report said 15 people were arrested on charges of blasphemy in 2016, including 10 Muslims and five members of religious minorities.

In April 2017, Mashaal Khan, a journalism student, was accused of posting blasphemous content online and was beaten to death by fellow students at Abdul Wali Khan University in Khyber Pakhtunkhwa province.

Pakistan’s government is being criticized for strictly enforcing the blasphemy laws.

In April 2017, the government used newspapers and mobile phone services to warn its citizens not to post or upload any blasphemous materials on social media.

The government has also reportedly encouraged people to report those who violate the blasphemy law.

Extremism Watch
Blasphemy: A Life-and-death Issue in Pakistan
Blasphemy is an emotive topic in Pakistan, where strong religious sentiments have led in the past to mob violence and worse.For those accused of blasphemy - which can include anything seen as a deliberate insult to God, Islam or religious leaders - such an offense is literally a life-and-death matter. The relevant section of Pakistan's penal code recommends either life imprisonment or death for any convicted blasphemer.The issue has arisen again in Punjab, where a court…

Middle East
Study: Blasphemy Laws on Books in One-third of Nations
Laws prohibiting blasphemy are “astonishingly widespread” worldwide, with many laying down disproportionate punishments ranging from prison sentences to lashings or the death penalty, the lead author of a report on blasphemy said.Iran, Pakistan, and Yemen score worst, topping a list of 71 countries with laws criminalizing views deemed blasphemous, found in all regions, according to a comprehensive report issued this month by the U.S. Commission on International…

East Asia Pacific
Facebook Meets With Pakistan Government After Blasphemy Death Sentence
A senior Facebook official met with Pakistan's interior minister on Friday to discuss a demand the company prevent blasphemous content or be blocked.The meeting comes after a Pakistani counter-terrorism court sentenced a 30-year-old man to death for making blasphemous comments on Facebook, part of a wider crack-down.Joel Kaplan, Facebook's vice president of public policy, met Interior Minister Nisar Ali Khan, who offered to approve a Facebook office in Pakistan, which has…

East Asia Pacific
Police Investigate Indonesian President's Son for Blasphemy
Indonesian police are investigating an allegation of blasphemy against the youngest son of President Joko “Jokowi” Widodo. Jakarta police spokesman Argo Yuwono said Thursday that police plan to summon Kaesang Pangarep for questioning after receiving a complaint about a video he uploaded to YouTube in May. The video entitled “Ask Daddy for a Project” - a reference to children of politicians who seek business favors - includes criticism of…