WASHINGTON - Pakistan’s government has formed a regulatory body to monitor and block blasphemous content online in an effort to further extend the enforcement of the country’s controversial anti-blasphemy law into cyberspace.

Pakistan Telecommunication Authority (PTA), the government-run communications regulatory agency, has created a 25-member group tasked with cracking down on websites, social media accounts and online pages that they consider offensive to Islam.

“The committee, being constituted by the Ministry of Interior, will include representatives from PTA, the Federal Investigation Agency (FIA), and the ministry,” Ismail Shah, PTA’s chairman, told the standing committee on information technology of Pakistan’s upper house of parliament recently.

Earlier in May, PTA had sent text messages to millions of cellphone users in the country and warned them not to post or share any blasphemous content online.

Blasphemy remains a controversial issue in the Muslim-majority country where anyone labeled as “blasphemous” faces dangerous consequences: The law states anyone found guilty of insulting Islam will receive a sentence of life in prison or the death penalty.

As government is committed to scrutinizing online contents, some rights activists charge that monitoring the internet will be a slippery slope.

“The monitoring of social media for blasphemous content is a dangerous precedent in Pakistan. The law has often been misused in the past and now a crackdown on internet will further complicate the situation,” Zohra Yusuf, a Pakistani human rights activist, told VOA.

Critics worry the state is using religion and national security as a pretext to discourage dissent on the internet, where people can express their opinions on topics such as politics, the military, social issues, women’s rights, religious freedom and human rights.

“In any democracy, such controls cannot be termed legal. Selective controls, targeted crackdown and culture of impunity only brings unrest in the society, especially for minorities and marginalized segments of the society,” Shahzad Ahmad, Pakistan director of the digital rights advocacy group Bytes for All, told VOA.

Lawmakers of the ruling Pakistan Muslim League-N (PML-N) party, however, vowing transparency in the enforcement of the law, defends the government’s action and considers it legal.

“PTA follows a process and blocks a blasphemous link after complete scrutiny. Similarly, the regulatory body completely investigates before anyone is apprehended or taken into the court under blasphemy charges,” parliament member Zahra Wadood Fatimi told VOA.

FILE - Pakistani journalists protest to condemn an attack on their colleague, Ahmed Noorani, in photo, in Karachi, Pakistan, Oct. 30, 2017.

Despite assurances from the government, rights activists worry formation of the group could be considered a Trojan horse, which will lead to people losing the relative freedom of expression they enjoy in cyberspace.

“It will be another tool for the state and people to settle down personal scores and vendettas. Do we even remember the secular bloggers abducted earlier this year and returned as ‘blasphemers?’”Zohra Yusuf asked.

In January 2017, five secular social media activists went missing from different cities in Pakistan. The activists reappeared after a few weeks with a label of “bloggers who committed blasphemy,” local media reported.

The bloggers were critical of the country’s powerful military, the existing political system and human rights violations committed by different factions, according to reports, which said the bloggers, fearing for their lives, sought refuge abroad. 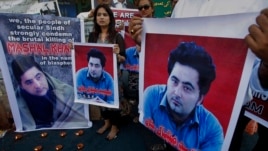 FILE - Members of a Pakistani civil society demonstrate April 22, 2017, in Karachi, Pakistan, against the killing of Mashal Khan, a student at the Abdul Wali Khan University in the northwestern city of Mardan. Police say the lynching of Khan, falsely accu

The state’s punishment is harsh for those found guilty of committing blasphemy. In some cases, when courts have not charged suspects, Pakistanis have taken the matter into their own hands.

A simple accusation that someone has committed blasphemy can lead to threats against the suspect. Other times, it could mean death.

In May, a Hindu man was rescued by police from a mob in Hub, Baluchistan. The man was accused of posting blasphemous content on social media.

In March, Mashaal Khan, 23, a journalism student of Abdul Wali Khan University in Khyber Pakhtunkhwa province was beaten to death by fellow students. He had been accused of posting blasphemous content online.

Earlier this year, Islamabad’s High Court issued directives to the Ministry of Interior to take prompt action when it saw content it deemed blasphemous on the internet, even if it meant blocking social media websites in the country.

Nawaz Sharif addresses a crowd during his visit to a mausoleum of Pakistani poet Mohammad Iqbal on Pakistan Independence Day in Lahore, Aug. 14, 2017.

A few days later, Pakistan’s then-Prime Minister Nawaz Sharif declared online blasphemous content on social media a “nefarious conspiracy.” He directed his government to take strict actions against those involved in such activities. He also ordered officials to discuss the matter with international social media companies.

With the formation of PTA’s regulatory body on monitoring blasphemous contents online, there will likely be more restrictions in cyberspace and more scrutiny of those who talk out against religion online.

East Asia Pacific
Pakistan Journalists Cite Growing Threats From Government, Militants Alike
Journalists in Pakistan say they are facing increasing risks ranging from the government's expanding control over social media to extremist threats that have spread from long-volatile regions to the streets of the capital.The latest attack left a journalist badly beaten on a street in Islamabad. Earlier this year, security agencies picked up several bloggers from urban centers who said after their release that they had been tortured and humiliated.Threats to reporters…

Extremism Watch
Blasphemy: A Life-and-death Issue in Pakistan
Blasphemy is an emotive topic in Pakistan, where strong religious sentiments have led in the past to mob violence and worse.For those accused of blasphemy - which can include anything seen as a deliberate insult to God, Islam or religious leaders - such an offense is literally a life-and-death matter. The relevant section of Pakistan's penal code recommends either life imprisonment or death for any convicted blasphemer.The issue has arisen again in Punjab, where a court…

Middle East
Study: Blasphemy Laws on Books in One-third of Nations
Laws prohibiting blasphemy are “astonishingly widespread” worldwide, with many laying down disproportionate punishments ranging from prison sentences to lashings or the death penalty, the lead author of a report on blasphemy said.Iran, Pakistan, and Yemen score worst, topping a list of 71 countries with laws criminalizing views deemed blasphemous, found in all regions, according to a comprehensive report issued this month by the U.S. Commission on International…

East Asia Pacific
Many Organizations Banned in Pakistan Thrive Online
It's dusk. The shadows of three men brandishing assault rifles welcome the reader to the Facebook page of Lashkar-e-Islam, one of 65 organizations that are banned in Pakistan, either because of terrorist links or as purveyors of sectarian hate. Still more than 40 of these groups operate and flourish on social media sites, communicating on Facebook, Twitter, WhatsApp and Telegram, according to a senior official with Pakistan's Federal Investigation Agency, or FIA,…