An 18-year-old male of Somali descent drove into a group of students at Ohio State University this morning, jumped out of his car, and stabbed at them, authorities say.

At least eight people have been hospitalized after Abdul Razak Ali Artan, also a Ohio State student, attacked students on campus near the engineering and sciences building, according to local fire department officials.

Minutes  before the attack, Artan wrote on Facebook that he had reached a ?boiling point? and was ?sick and tired? of seeing Muslims around the globe ?killed and tortured,? reported CNN and NBC.

CNN reported that Artan was a Somali immigrant to the U.S.

Ohio State officials lauded Officer Alan Horujko in stopping Abdul Razak Ali Artan before he could injure more people, according to CNN and the Washington Times. 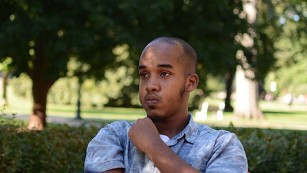 Horujko shot Artan when he did not put down his weapon as ordered, Ohio State President Dr. Michael V. Drake said in a news conference Monday.

Officials said most, but not all, of the victims were "awake and talking" and notifying their loved ones of their condition.

Students were told to take shelter and ?Run Hide Fight? in a tweet from the university emergency alert account around 9 a.m. The alert has become shorthand to students and others that a shooter is on the loose and to run away or fight back.

?I was sitting in my dorm room and heard gunshots and 10 seconds later heard sirens,? Stephen Yunker, an OSU freshman, told HuffPost via Twitter. ?Looked outside to see a fire truck + cops a couple streets away and a body laying on the ground.?

"Smelled what was like gun smoke as people rushed into buildings,? Mackenzie Bart, an OSU student, said over Twitter. ?Police and fire were everywhere. Got locked into a building with just 4 other girls and pushed everything we could find against a door.?

The attack reportedly occurred in Watts Hall, where science and engineering programs are located. On television, uniformed and armed SWAT teams were seen snaking up a stairwell of a parking garage. Local police were assisted by the federal Bureau of Alcohol, Tobacco, Firearms and Explosives, reports said.

The identity of the victims or assailant has not been released. Please stay tuned for more details.