Big, Colorful American Quilt Has a Story to Tell

WASHINGTON - It’s often hard for victims of sexual violence to speak about their experience. But 3,000 of them were able to express themselves through art, creating a personal square of fabric to be part of quilts that make up The Monument Quilt.

Each square is a message from survivors of rape, incest or domestic violence. They are women, men and children from across the U.S. and Mexico. Laid out on the National Mall this month, the Quilt squares spelled out “YOU ARE NOT ALONE” in English and Spanish.

The project was envisioned and organized by FORCE: Upsetting Rape Culture. The Baltimore-based activist collaboration produces large-scale public art projects to generate media attention and get millions of people talking.

​​“We’re a survivor-led organization,” said the group’s co-founder, Hannah Brancado. “We’re putting the needs of survivors first in creating a public platform for our healing. This display is the final, the 50th display that we’ve done around the country in the U.S. and Mexico in 33 different cities in the past six years.”

Four years ago, one of those events inspired Greg Grey Cloud to join the campaign.

“At that time, no male had shared their story until finally I got enough nerve to share my story,” he recalled. “Since I was 9 years-old, I was sexually assaulted. But these women here at the Monument FORCE, they created such a safe space for me to share my story.” 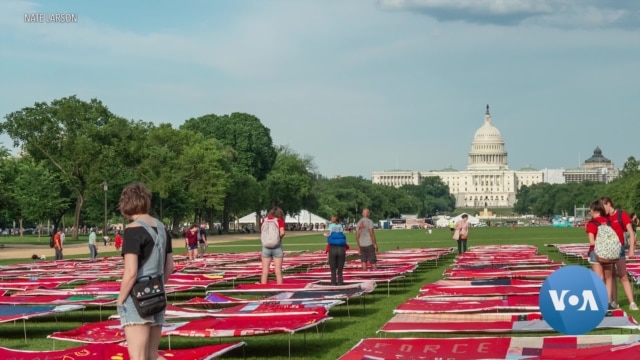 That changed his life. Now, he does not blame himself or feel guilty about what happened to him.

“For the longest time since, I stayed the 9-year-old,” he explained. “I was a grown up man, but I was a 9-year-old in my head. But they shared the space for me where I can be a grown-up man and continue to share what happened to me when I was a child.”

Kalima Young, a member of the leadership team for the Monument Quilt, has worked with hundreds of sexual violence survivors and their relatives.

“Our commitment is to make sure that the most marginalized voiced and stories are included,” she said.

Through their workshops in Baltimore, Young has come to see how resilient people are. She recalls meeting a grandmother, mother and granddaughter.

“The three of them experienced sexual violence from a family member,” she said. “Each of them was making her own quilt square. The grandmother had also brought along her grandson, who was around 8 years old. He made his own quilt square as well and it says, ‘I commit to being a better man.’”

In addition to allowing victims to speak up and share their experience, Young says the quilt making process is therapeutic.

“Traumas, especially gender-based violence and sexual trauma lives sort of in the soul, lives in the body,” she explained. “When you put the quilt out on display, it often acts like an acupuncture needle and opens up those places of trauma and often people who don’t even identify as survivors once they experience the quilt, they realize that they have sexual violence in their history.”

The quilt displays have attracted thousands of visitors, adults and families with children, men and women.

Naomi Chandel Kumar walked around the quilts laid out on the National Mall and was touched by the survivors’ stories.

“It’s really beautiful to see survivors standing up and not being afraid and being able to find healing in the community,” she said. “It’s really incredible to see that. It’s also very sad to see how impactful this is on all communities.”

Organizers say their work does not stop here. The display is just the launching platform for the group to take the issue of sexual violence to wider audiences, heal more survivors and inspire change.

USA
Barr in Alaska to Talk Native American Violence
Tribal representatives in Alaska told U.S. Attorney General William Barr on Wednesday that rural Alaska Natives suffer from multiple public safety problems, including no law enforcement presence in multiple villages, substance abuse and alarmingly high rates of violence and sexual assault.Barr is at the start of a four-day visit to Alaska. Among his first actions in the visit, Barr heard from Alaska Natives Wednesday who participated with him in an Alaska Native justice…

USA
Some States Trying to Close Marital Rape Laws Loopholes
Witches were still being burned at the stake when Sir Matthew Hale came up with his legal theory that rape could not happen within marriage. The 17th century English jurist declared it legally impossible because wedding vows implied a wife’s ongoing consent to sex.Three and a half centuries later, vestiges of the so-called “marital rape exemption” or “spousal defense” still exist in most states, remnants of the English common law that helped inform…

USA
Reports of Sexual Assault in the US Military Spike
The Pentagon says reports of military sexual assaults jumped by 13% last year, but an anonymous survey of service members suggests the problem is vastly larger. The survey results found that more than 20,000 service members said they experienced some type of unwanted sexual contact, and only about a third of those filed a formal sexual assault report. The survey covers 2018 and was released Thursday. The survey total is about 37% higher than two years…

USA
Judge: Key Harvey Weinstein Hearing to Be held in Secret
An important pretrial hearing in Harvey Weinstein's sexual assault case was poised to play out in secret on Friday, after a judge ruled against news organizations fighting to keep the courtroom open. Both the prosecution and defense asked that Friday's hearing, which will deal with trial strategy and potential witnesses, be held behind closed doors. Manhattan state Supreme Court Justice James Burke said closing the courtroom to the press and public was …

2.5 Billion T. Rex Roamed Earth, but Not All at Once, Study Says

US Water Managers Warn of Dismal Year Along the Rio Grande