Biden Grows His Lead in Democratic Field Early in Race

Biden Surging as Democratic Front-Runner for 2020

Former vice president Joe Biden has surged into a big lead among the Democratic presidential contenders for 2020.

The latest polls show Biden with a healthy lead over Vermont Senator Bernie Sanders and the rest of a large, diverse field of Democratic White House hopefuls.

Biden's rise comes in part because many Democrats see him as perhaps the strongest challenger to President Donald Trump next year.

A new Reuters/Ipsos poll of Democratic and independent voters has Biden at 29%, Sanders at 13% and the rest of the field at 6% or below.

Poll: Biden Expands Lead Over Rivals for 2020 US Presidential Nomination 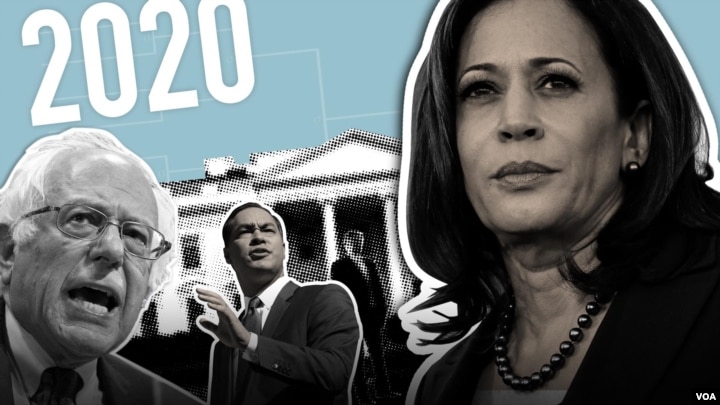 Biden took his front-runner presidential campaign into the key early-voting state of New Hampshire this week with a pitch that targeted Trump head-on.

"Let's remember who we are. This is the United States of America. Anything we have set our mind to, we have never failed to accomplish," Biden told voters in Hampton, New Hampshire. "I refuse to postpone any longer the possibilities for this country and we have to end it now, this administration."

Biden has expanded his lead in the polls since he got in to the race last month. In the latest Reuters poll, he went from 24% late last month to 29% Wednesday.

But the 76-year-old Biden faces an energized Democratic field that is not shying away from drawing a contrast with the former vice president by advocating big change with an eye toward the future.

"We need big, systemic change in this country!" Warren said to cheers at a town hall in Ohio.

Warren is one of several women contenders in the Democratic field who hopes to mobilize a key Democratic constituency — female voters.

"I know I can win states like Ohio and Pennsylvania and Michigan and Wisconsin, the states we must win to defeat President Trump," Gillibrand said.

Biden appears to be surging in the polls because many Democrats think he would be a strong candidate against Trump in next year's presidential election.

"A lot of Democrats think, No. 1, he (Trump) is beatable, and No. 2, the country is in trouble under this person, big time, and that he is debasing a big chunk of the country and that needs to stop, and we need to do the stopping," George Washington University analyst Matt Dallek told VOA recently.

A new Quinnipiac University poll seems to buttress the argument that Biden would give Trump a tough electoral test. The survey found Biden leading Trump by a margin of 53% to 42% in the key swing state of Pennsylvania, a state Trump won against Hillary Clinton in 2016 but which previously had voted Democratic in several recent presidential elections.

Biden has a clear edge in Pennsylvania even though 54% of those surveyed by Quinnipiac said they are better off financially today than they were in 2016. Twenty-one percent in the poll said they were worse off and 22% said their situation is the same.

However, recent polls also suggest some potential weaknesses for Biden. The latest Reuters/Ipsos poll found that the former vice president led in all demographic groups except for millennials (ages 18-37). They slightly preferred Sanders.

A recent Morning Consult/POLITICO survey found 42% of those who took part between the ages of 18 and 29 said they were less likely to support Biden because of his 2002 vote in support of the Iraq War.

Biden has 44 years of government experience behind him as first a senator from Delaware and then as President Barack Obama's vice president.

Biden is quick to remind voters of his tenure with Obama, but his long record of Senate votes could give his Democratic rivals plenty of ammunition to use against him in the upcoming primary debates that begin next month.

It is a challenge that Biden and others with a long Washington record to defend will have to rise to, analyst Dallek said.

"I think that is what makes their path to the White House trickier because there is a lot there that can be attacked. And there are a lot of advantages to being in some ways relatively less seasoned because you are just not as big a target," he said.

Trump appears to be following the Democratic race and did his own take on the battle between Biden and Sanders during his recent rally in Panama City, Florida.

"You have got a choice between 'Sleepy Joe' and 'Crazy Bernie,' and I will take any of them. Let's just pick somebody please and let's start this thing. Let's start it. Pick somebody!" he told the crowd.

Picking a nominee who can take on Trump remains a priority for many Democratic voters. And many of them now believe that defeating the president will be no easy feat, according to Jim Kessler of the center-left policy group Third Way.

"You have to go after this campaign like the president is the favorite because he at least has a 50-50 shot at winning, and I would say probably a little bit greater," Kessler said.

Some of the Democratic contenders seem to be adjusting their campaign approach in the wake of Biden's polling surge.

Sanders has begun to focus more on his differences with Biden over the Iraq War, trade, the environment and health care.

O'Rourke has decided to step up his national television appearances, shifting away from a focus on local town halls after failing to catch fire in the polls.

And Harris has ramped up her criticism of Trump in recent weeks on the campaign trail, perhaps in response to the perception that Biden is succeeding by targeting the president directly.

Democrats hold their first debates next month but do not actually begin the nominating process until votes in Iowa and New Hampshire next February.

For the moment, though, Biden leads the field and is considered by many party insiders to be the clear front-runner, a status he never attained in his two previous runs for president.